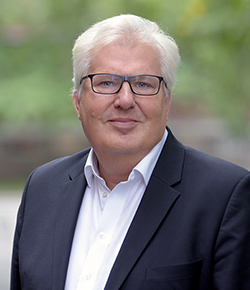 Current position: Professor in learning and digitalization, Department of Education, The Faculty of Educational Sciences.

Professor Sten Ludvigsen received his PhD based on a study of learning in medical institutions (1998). He is educated in educational sciences (education psychology) and he has specialized in research about how to use digital learning resources and the relationship between co-located and distributed settings, in the educational sector and in workplace setting.

Area of expertise: Learning and digitalization in education and work.

2014-2016 Professor in learning and digitalization, Department of Education

2013-2014: Professor in Medical Education, The Faculty of Medicine, University of Oslo

2004-2009: Director and professor at InterMedia, University of Oslo

2019-2020: Leader of the Board of Peder Sather Center, University of California, Berkely

2018-2020: Leader of the work group that developed new IT-strategy for University of Oslo (the masterplan).

2017-2020: Leader for the Board for ProTed, University of Oslo, Dept. of Teacher Education and School Research

2013-2015: Leader of the public committee appointed by the Norwegian parliament in that delivered two reports to the Norwegian government about the future of the Norwegian school system (K-13) (NOU 2014:7 and NOU 2015:8.

2009 - 2012: Leader of the board for the evaluation of the knowledge promotion reform in the Norwegian School system (1-13). 'Programstyret for Kunnskapløftet'

2020: Executive Editor in the "International Journal of Computer-Supported Colllaborative Learning"

2016-2019: Editor in Chief in the "International Journal of Computer-Supported Colllaborative Learning"

Tags: Education, learning and digitalization
Try a new version of this publications list.