Physically active for less than 30 minutes per day

More than one third of school children spent less than 30 minutes per day on physical activities during Corona lockdown. 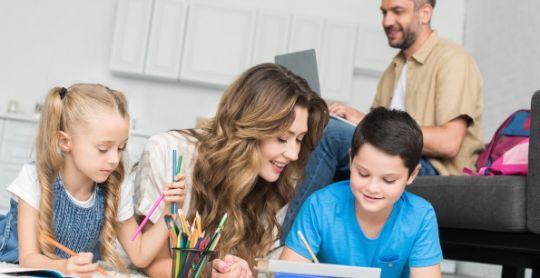 The new study shows that the degree to which kids were physical active under the corona lockdown, highly depended on their parents' initiative.

For many of us, our everyday life for several months has been - mainly - about sitting still in front of the computer screen, with school children being no exception. When the Norwegian schools were closed in March 2020, and the teaching has been moved on digital platforms, several of the school-related physical activities disappeared, including the weekly gym class. At the same time, it was more than just gym class that disappeared.

- Most Norwegian children tend to walk or cycle to school, and then there is a lot of activity during shool breaks free minutes, both indoors and outdoors, says senior researcher Astrid Roe.

Mrs Roe is a senior researcher at the Department of Teacher Education and School Research at UiO and member of the QUINT Center (Quality in Nordic Teaching). Together with Marte Blikstad-Balas and Cecilie Pedersen Dalland, she has conducted a comprehensive study that examined several factors of home schooling in Norway.

- All these activities were just gone during the lockdown. The organized sport activities that many children participate in in their free time have also disappeared, she says.

The physical activity among Norwegian children has been gradually declining during the past years. At the same time, physical inactivity in children is known to lead to obesity and chronic diseases in general.

The study conducted by Mrs Roe and colleagues shows that over 36 % of school children (referred to in the study) had less than 30 minutes of daily physical activity during the corona lockdown Spring 2020. 14% of those were active for only 15 minutes or less per day. This is far below the required 60 minutes of physical activity for school children as put forward by the Norwegian Storting in 2017.

Age differences were rather clear: children aged 6-9 were most active (43% had more than 60 minutes of activity per day), compared to only 18% of teenage children (13-15 years). However, those who were most physically active were the same students who showed the most commitment and interest in school work.

- The study indicates that those who were dedicted to the school work, were also good at staying physically active. At the same time, we see that most of the physical activity may have been initiated by the parents, Mrs Roe emphasizes.

Several parents interviewed during the survey, confirmed that they deliberately used the new situation and flexibility connected to working from home, in order to do physical activities together with their children.

- This strengthens our previous findings which show that the parents' efforts were decisive for whether the children at all got started with their school work and got it done, says Roe.

Several Norwegian schools and teachers have included breaks in the digital schooling which should have been used for physical activities, but the teachers who were interviewed, admitted that they did not always have an overview of whether children did something or not. Whether a physical activity was a part of homeschooling or not, also varied greatly between schools and age groups.

The World Health Organization predicts that there may be more pandemics in the future, and there is a lot to learn from the corona experiences, Mrs Roe says. When the authorities develope a strategy for how a digital school should look like in the future under similar circumstances, maintaining physical activity for the children should definitely be a part of such a strategy, she concludes.

The study in question included 4,624 parents and 726 school teachers in Norway who were asked about various aspects of digital homeschooling under COVID-19.

The academic article "The Impact of COVID-19 and Homeschooling on Students' Engagement With Physical Activity" is written by Astrid Roe, Marte Blikstad-Balas (Department of Teacher Education and School Research) and Cecilie Pedersen Dalland (Oslo Metropolitan University). The article is published in Frontiers in Sport and Active Living.