This project explores how the use of “work plans” might produce “new” strategies when Norwegian Secondary School students work with individualised assignments in school.

Work plans, which are documents that describe different tasks each student needs to do within a certain period of time - normally two or three weeks, are used by 60 per cent of Norwegian students.

During the past decade, the Norwegian educational policy has been concerned with the fact that boys are underperforming when compared with girls, and that they are continuing to lag behind especially in reading achievement. Even if this academic gender gap is an international phenomenon, one common point of view is that the Norwegian compulsory school has failed the boys’ educational needs by not being able to integrate them when organizing the classrooms as learning environments. Some claim that the extensive use of different individualized teaching methods has lead to a wider academic gender gap in the favour of girls. The substantial use of work plans which gives students more responsibility for their own learning and at the same time demands a great deal of self-discipline and self-regulation, might have contributed to how boys lag behind their female peers. 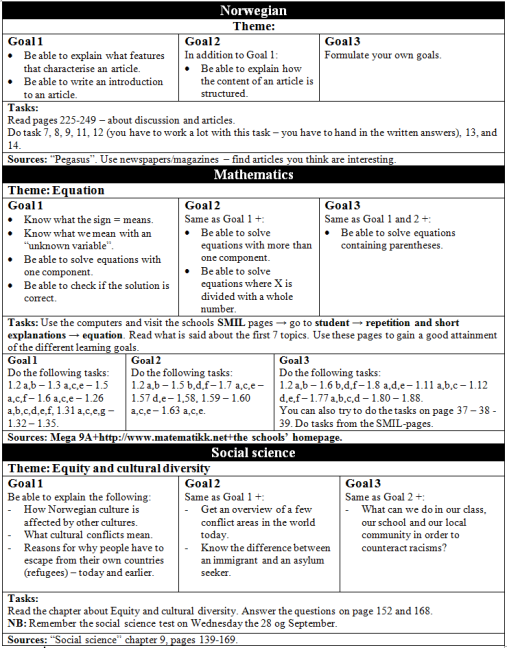 This is an extract from a typical work plan.

This project draws on the PISA+ video study (Klette, 2009; Klette, et al., 2008).  Based on video observations from six 9th grade maths-, science, and reading classrooms in Norway during 2005, the PISA+ project gives particular attention to classroom activity aiming to understand and throw light on the pedagogical processes that are responsible for the PISA results. The six classes, from as many schools, were selected to provide variation according to pedagogical organization, demography and ethnicity. To meet these three important criteria two of the schools were located in suburban districts, two were situated in rural areas, and two were inner city schools. One class from each school participated in the project. All teachers used L97 (Curriculum for 10-year compulsory school in Norway) to regulate their teaching, which was the Norwegian curriculum until 2006.