Professor David Gauntlett has developed and completed a number of projects in which creative production activities are used as a social research tool. For example, research projects have invited young people to make videos, drawings, and collages as part of a reflective process of exploration and self-expression that enables research participants to carefully tell their own stories. The ArtLab website [http://www.artlab.org.uk] is a hub for this work.

He recently completed the first major phase of a funded collaboration with Lego to explore how the Lego Serious Play consultancy method, in which participants build metaphors of their feelings and experiences in Lego, can be used as a social research method. The findings about the reflective and creative process also help us to understand the process and outcomes of digital storytelling.

These studies are discussed in the book Creative Explorations: New approaches to identities and audiences, published by Routledge in May 2007.

Professor Gauntlett has given a number of conference papers and talks on these projects. He also supervises a number of research students who are also employing creative methods related to digital storytelling to explore issues such as contemporary masculinities, online identities, and ethnic identities. 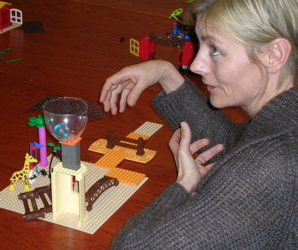 A Lego Serious Play session at InterMedia in January 2006.

Gauntlett, D. (2011), Making is Connecting: The social meaning of creativity, from DIY and knitting to YouTube and Web 2.0, Cambridge: Polity.