Throughout our human life we are surrounded by an increasing amount of texts. Both as readers and writers is important to understand how different textual communication shapes our participation in social life. 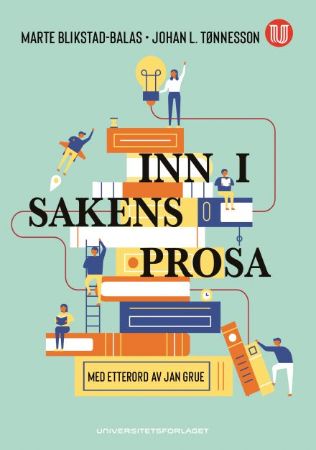 Marte Blikstad-Balas and Johan L. Tønneson have written the book Inn i Sakens Prosa, that provides an introduction to non-fiction text analysis through a number of examples. The authors present tools for understanding genres and text types, context and reader contract, as well enabling you to see the interplay between form and content. The book shows how non-fiction can be so much more more than an informative way to present facts.

The book is aimed for teacher students and practicing teachers, but also to anyone who is interested in the increased textualisation of society through for example all the forms that document our everyday lives, all the  interaction on social media and the spreading of fake news.The book provides insight into the underlying premises on which different texts are based, and what interests different texts promote.

The book was launched on 16 September in Oslo with a live-sent panel talk. At the talk Blikstad-Balas referred to QUINT’s LISA Nordic study to show that both literature and nonfiction texts used in Norwegian language arts instruction are often very genre specific and why that may be problematic. The authors of Inn i Sakens Prosa wanted to put the different texts at the centre of the book, and they even use a computer game as an example of a non-fiction text. Blikstad-Balas highlights that there is actually a lot of reading involved in playing computer games.

The book delves into the definition of non-fiction, or “sakprosa” as we say in Norway. Tønneson defines it as texts that the audience has reason to interpret as  a direct, informative utterance about reality, factual rather than fictional. Blikstad-Balas reminds however that this concept is challenged by widespread fake news and sensationalist media and social media posts, that all attempt to frame their utterances as realistic and truthful.

– This is why it is important to investigate non-fiction - the interplay of form and content, and the rhetorical devices it uses – in order to develop the students’ critical reading abilities in an increasingly text based world.

Also the curriculum renewal in Norway explicitly calls for such perspectives. The authors urge that also non-fiction texts need to be interpreted and discussed critically. It is important to consider where they originate from, the source and to look at the rhetorical devices used – and really get to the issue of what purposes the authors have.

Blikstad-Balas ends with highlighting the importance of developing a language about language, so that we can differentiate between texts and learn to read critically.

You can view the panel talk (in Norwegian) online.