This design case is involved in mediating the process of reconstruction of ships excavated in Bjørvika, at the Norwegian Maritime Museum, by the use of  social media to communicate intangible heritage knowledge, both related to museum exhibition and in relation to urban communication. 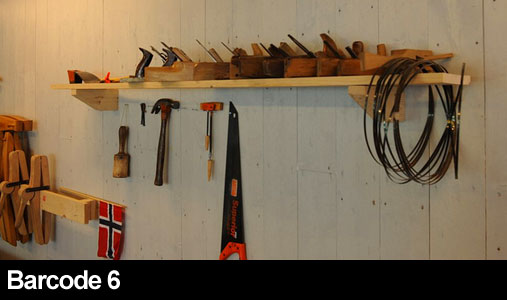 The Barcode project at Norwegian Maritime Museum concerns the 14 ships and boats that were excavated in Bjørvika summer 2009. The excavation is said to close a missing link in Norwegian boat history as well as in the history of trade and shipping in Norway.

Barcode 6, the sixth boat excavated, will be reconstructed in an open workshop in front of the museum entrance. The reconstruction project is also part of an EU project in collaboration with a boat museum at Limefjorden in Denmark. The idea is to exchange the building process of two boats – one in Norway and one in Denmark.

The boatbuilder will document the process, have a blog and be available for questions from the public during the whole process. The workshop is defined as an experimental zone – where both new forms of curating and new forms of mediation can be tried out.

TRANGO has been involved in this experimental lab in several ways; by advicing on the set up of blogs, downloading procedures etc. for the boatbuilder using the blog as a documentation tool – based on experiences from Gokstadboatproject. And on finding ways that the process of the reconstruction can be communicated with multitouch technologies on the workshop windows. The challenge is both to give access to earlier phases of the reconstruction process – as well as the context of the reconstruction such as the excavation process and the archaeological conservation. The idea is that this the blog, the documentation material from the archaeological processes related to Barcode 6, the practical and physical activities in the workshop will mediate the museal processes that stays behind the artefact Barcode 6. And that this will invite people into the museum exhibition.

Barcode 6, will as a finished boat, be exhibited in the DNB building at Bjørvika.

Maritime museum is physically placed between KONTIKI and FRAM museum at Bygdøy, but has not the same amount of visitors. The museum building is therefore to be opened up, and there is overall great interest in using digital technologies to get people into the museum as well as building a bridge between the museum and the centre of the city.

To follow the work of the museum involving social media to communicate intangible heritage knowledge, both related to museum exhibition and in relation to urban communication.

Dialogues in museum spaces (financed by the Art council of Norway)

Documentation video of the design; ideas and challenges