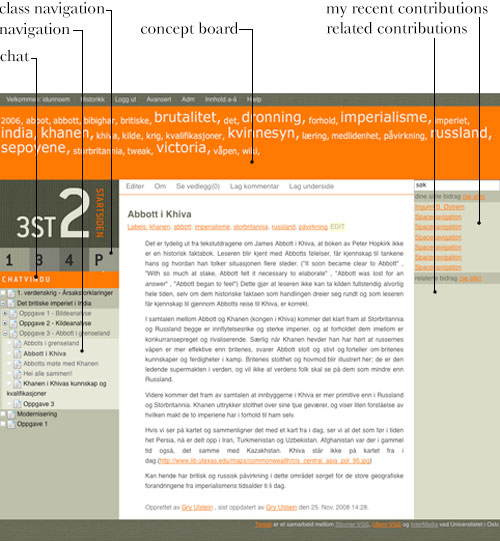 Any wiki-page can be labelled with a number of concepts that describe its content. The wiki suggest labels that are already used on other pages, and support entering new ones. The concepts from all pages written within a class are aggregated in a concept board. This is rendered as a cloud of labels, depicting the frequency of use of each concept by its size, and has a dominant position at the top of the interface.

By hovering over the concept by the mouse pointer the definition of the concept is displayed. A click navigates to a designated page for the concept showing its definition, and any related concepts, recently added concepts, and popular concepts. Further, all pages labelled with this concept are listed.

The definition of the concept is, as other wiki texts, collectively created. The concept board of, along with its support for creating concept definitions is an enhancement of standard wiki functionality. We regard this tweak as particularly useful in a context of modern history learning.

As a stylistic element the concept board represent a graphical and direct representation of the diversity of concepts. As a wiki is usually heavily text oriented, this element is important to highlight the collective dynamics of a growing wiki.

The design motivation for the concept board as a prominent part of the interface was that it should invite to abstraction, and that it could act as a bridge between the teacher's lecture in the classroom context and the pupils' subsequent work at the computer. Hence also the hint to the blackboard as a metaphor.

By optimal use, considered to be both in relation to the context and actual use of the wiki, the concept board may have potential as:

We designed the wiki to be shared across four classes on the same level, where each class had its space with wiki pages. Students should be able to browse their peers' work, also when the work was done in other classes, but still only contribute in their own class' space. Wiki pages where organized in a shallow hierarchy, typically with task descriptions as top nodes, and contributions as sub pages of the task descriptions. To show this structure we implemented an overall navigation menu that is dynamic in relation to the class' space. When navigating within a class' contributions, levels are indicated graphically.

We observed a clear contradiction between the traditional school task focusing individual contributions and the wiki's growing volume of collectively created texts. The titles for the wiki pages, provided by the students, were less meaningful, such as "task number 2" or "Idunn's response". The texts also generated a parallel understanding of a domain, rather than a supplementary one.

Chat is available through a button centrally located above the class contributions in the navigation menu. It was desirable that the chat would be internal to the wiki rather than using external and more established chats such as MSN or Facebook.

Initial evaluation of the chat suggested it as a good channel for the teacher in the learning environment, and a means for giving teachers a voice and a role within the learning tool. It turned out, however, that at Stovner teachers preferred to go around in the computer hall and speak to the students individually or as a group.

Description: The list 'your recent contributions' offers the student a means to revisit own work without having to use the navigation menu. Easy access to own work was regarded useful in the editing process and could also represent a "threads I follow" functionality typically found in net forums, and could motivate students as it highlights their contributions.

The fact that the list include all intermediary changes to contributions, made this feature less useful than intended.

Description: 'Related contributions' lists pages labeled with the same concepts that the student has used herself for her latest contributions. This would list peers' work otherwise not noticed by other means than browsing. We considered it to be useful to display pages that would be relevant in the students' activity (such as further reading, potential links and potential co-writing). 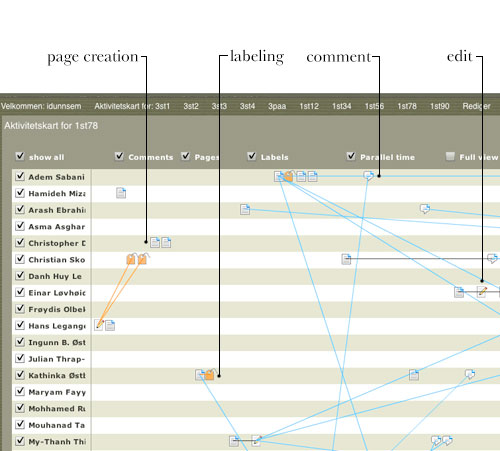 Description: The activity visualization shows a symbol for every page creation, edit, labelling and comment on a page. The visualization is organized timely from earlier to the left and later to the right, and shows one lane of activity for each student in a class.

Three types of relationships is drawn between symbols:

The visualization is dynamic and can focus on individual contributions or on class activity as a whole (we have denoted this parallel view and full view). In the latter all student activity is compressed into one screen, hence bringing out the patterns of collaboration. There is also short cut navigation from the symbol in the visualization to the actual wiki page, concept page or comment.

The visualization can have a role both in assessment and as a tool for teachers' intervention in the learning activities. We decided to put focus on process in the visualization, and this may turn out to be useful for intervention, but may not correspond to the traditional assessment where the focus is on the end product.

From an assessment point of view we could imagine alternative ways to visualize process by directly using the content and focusing more on the transformation of pages. This could be done using e.g. a cover flow metaphor. 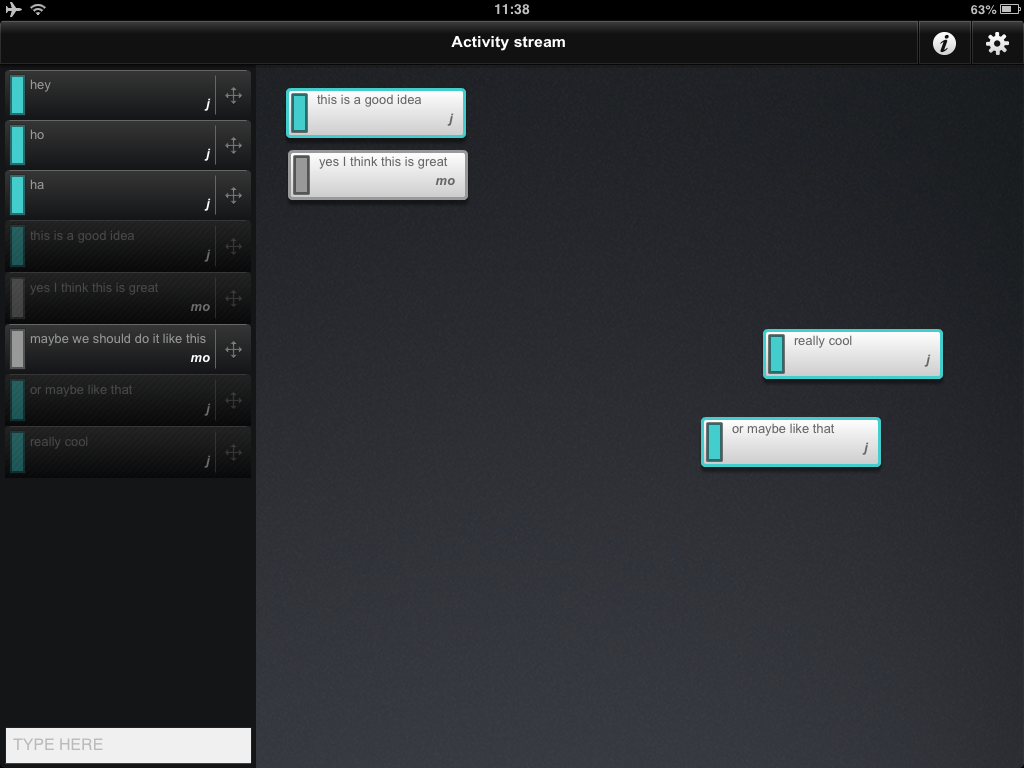 The tool uses features known from Twitter, such as short statements and options for hash tagging to form aggregation of related statements. Microblogging was selected because we believe students are familiar with the short message format and the option for providing hash tags in services such as Twitter (Luo & Gao, 2012). The hash tags are the basis for the selection, categorisation and spatial organisation of ideas and the formation of relationships of concepts that are important in order to understand the topic the students are studying.

Tablets were selected to support group work in the classroom. The multi-touch interface of a tablet afford spatial organisation of statements by direct manipulation.

The note-sharing tool was used in a history project that started with an introductory teacher lecture based on a chapter in the students’ textbook. After the teacher’s lecture, the students wrote individual essays in a wiki using their textbooks and Internet sources. This resulted in statements they entered in a chat window we provided. In groups they assessed and negotiated their findings and organised their statements spatially on a screen. Finally, the groups took turns presenting in a plenary session that resembled an imaginary conference in the weeks before the outbreak of the First Wold War.

The note-sharing tool was developed for three main use scenarios:

We provided a chat window that was arranged as an overlay to a web window with the class wiki. The chat window had two functions: (A) teacher-student communication during seatwork. Color codes are also used, as shown in the figure (blue: myself; black: other students; green: teacher; older messages: greyed out). (B) Connecting individual and collective activities. The students used the wiki to write short individual essays as a starting point for the thematic exploration. Based on this work, the students wrote Twitter-like messages in the chat window. The students were instructed to apply relevant hash tags to their messages in order for the relevant group to be extracted, i.e. #italy, #england  (each group was assigned a nation). 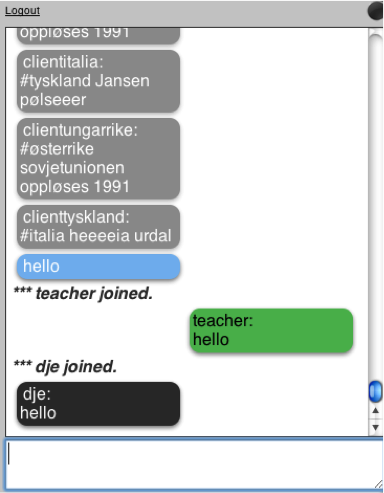 The groups worked in the classroom using one tablet (iPad) per group. Each tablet was associated with a nation. The application running on the iPad fetched all the statements belonging to the nation from the server by querying the appropriate hash tag. 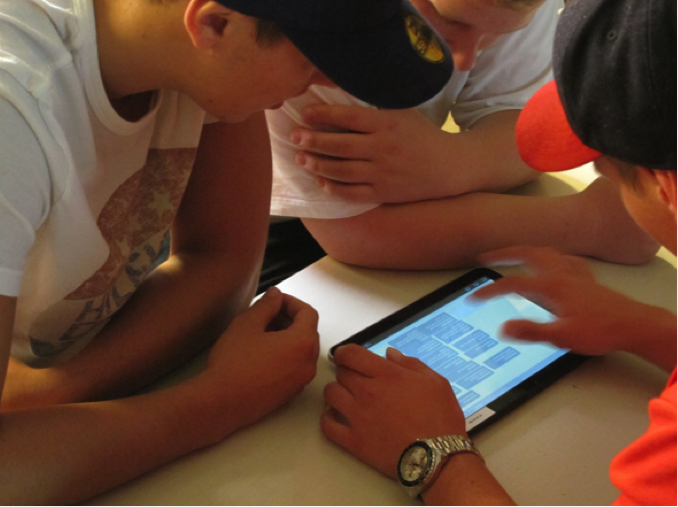 Each group is able to ‘take the stage’ by toggling the ‘share’ button and thus sending the current view to a PC in the classroom that is connected to a projector. Each group can take control at any time, which creates a fluid transition between the groups. We provided a tablet that enabled the teacher to move freely within the classroom during the whole project, and at the same time answer 'live' questions from students and give general instructions to all students. 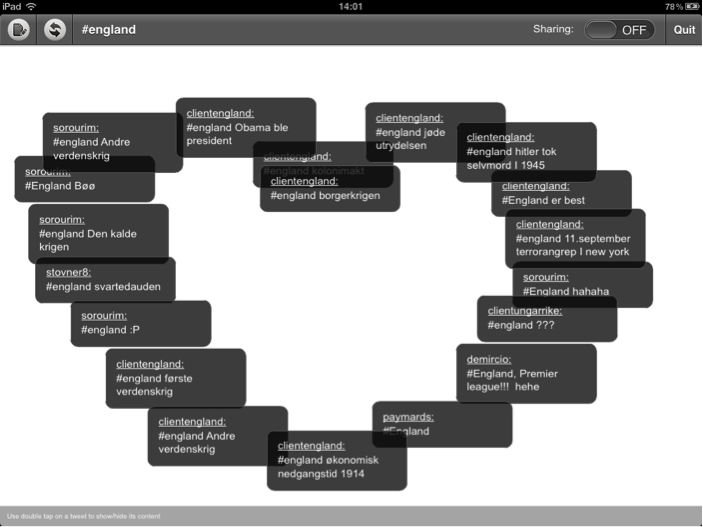 Example of spatial organisation of statements from a group

We observed that the note-sharing chat tool worked best for the strongest students. However, since the tool facilitated sharing both in the groups and in class discussion, all students gained access to each other’s statements. In other words, the intervention facilitated the students' ability to externalise and bring with them ideas and arguments across activities, making these available for all.

The note-sharing tool has been redesigned and is now available on App Store for use on Apple iPads. It is named Socius (latin for sharing and partner). The redesign implies that teachers may try out the tools in their class without our support. We provide two modes for teachers and schools:

The 'LIVE' mode enables schools to connect the tool with their existing messaging infrastructure (XMPP/OpenFire), while the 'DEMO' mode is a temporary area in which teachers can test the features of the application.