I: Studier i pædagogisk filosofi 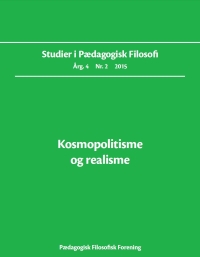 Europe is facing a wave of refugees and migrants. To solve the many inherent problems is primarily a practical political task. However, there are existential experiences, democratic values, human attitudes, and political principles involved, and I am going to look particularly at the following three aspects of the refugee crisis, 1) the existential (I refer to the philosopher Martin Heidegger and to the political thinker Hannah Arendt), 2) the political (I turn to the EU’s steps for a common refugee policy), and 3) the legal (I refer to Immanuel Kant’s notion of hospitality and Seyla Benhabib’s notes on Human Rights). Finally, I will make a concluding remark on education’s task (I refer to Hannah Arendt’s and Aristotle’s notion of philia).