A dialogical approach to language, learning and communication.The legacy of Ragnar Rommetveit 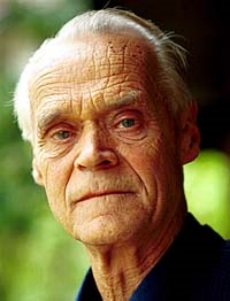 Ragnar Rommetveit died on June 11, 2017, at the age of 93. The research community has lost a brilliant scholar and one of its most consistent and truly interdisciplinary scientists with a dialogical approach to language, thought and communication. After finishing his studies to become a teacher, he studied psychology and became a professor of Psychology in 1958 at the Department of Psychology, University of Oslo, a position he held until 1994.

Ragnar Rommetveit influenced and inspired researchers and students internationally and nationally.This includes researchers and students at the Faculty of Educational Sciences at the University of Oslo. He was a highly appreciated teacher and his book, Språk, tanke og kommunikasjon (1972) was for many years required reading among the faculty’s students of language and communication. Inspired by scholars such as Wittgenstein, Vygotsky and Bakhtin Rommetveit has also influenced students and researchers of learning by his distinct dialogical approach to the understanding of language and mind. In the seminar we want to highlight his importance and relevance to modern approaches to the understanding of language, thought, communication and learning.

10:25-11:05  Professor James Wertsch: Narrative Mediation and the Architecture of Intersubjectivity in Imagined Communities

James Wertsch is a Distinguished Professor at Washington University in St.Louis, director of the McDonnell International Scholars Academy and professor of sociocultural anthropology. He has interpreted works and ideas by Soviet Russian researchers such as Vygotsky, Bakhtin and Leontiev and introduced them to the west. His own research and writings cover a broad range of topics such as, the social formation of mind, identity and mediational means, and collective memory. He was the first Doctor philosophiae honoris causa at The Faculty of Educational Sciences (1997) and for many years a professor II at The Faculty of Educational Sciences.

Per Linell is a Professor emeritus of Language and Culture at Linköping University. He is now Senior Professor in the Department of Education, Communication and Learning at Göteborg University. Per Linell has an interdisciplinary research profile, with a specific focus on general dialogical theory of human sense-making, communication, thinking and action, and institutional communicative activities in contexts such as legal, health-care and educational institutions and professions.

The seminar is free of charge and open to all.